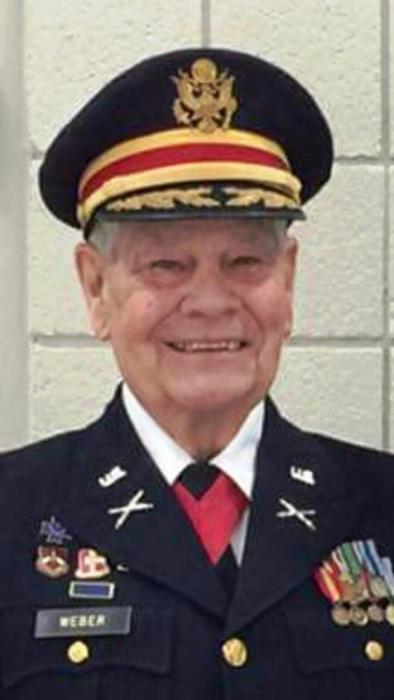 A Vigil Service for Colonel L. Lodge Weber, US Army Retired, age 86, will be held Friday, October 26th at 5:00pm at the Chapel of Norton Funeral Home.  Deacon Reggie Armstrong will officiate. A visitation will immediately follow the service until 7:00pm.

A visitation will be held on Monday, October 29 at Geo. H. Rohde & Son Funeral Home in Cincinnati, OH from 5:00-7:00pm.  A Funeral Mass will be held on Tuesday, October 30 at 11:00am at St. Cecilia Catholic Church, entombment will follow the Mass at Spring Grove Cemetery.

Mr. Weber passed away Tuesday, October 23, 2018.  He was born in Cincinnati, Ohio, the son of the late Louis L. and Rose Helen Schorr Weber.  He was a decorated Veteran, and retired as a Colonel from the US Army Reserve.  He served as Battalion Commander in the 5 / 28th Artillery.  He was also President of Weber and Associates, a member of the Oriental Order of Groundhogs for 58 years, a member of St. Mary’s Catholic Church and a member of The Knights of Columbus, with honors of the fourth degree.

Norton Funeral Home is honored to serve the Weber family .

To order memorial trees or send flowers to the family in memory of L. Lodge Weber, please visit our flower store.