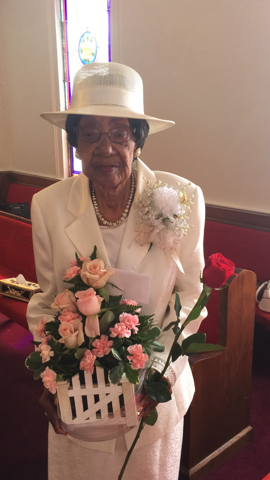 A Celebration Of Life Service for Mrs. Ada B. Scarborough Frierson age 90 will be held 11:00am Saturday, November 30, 2019 at Mt. Hermon Missionary Baptist Church.  Pastor Adeira Black and Rev. James Hudley will officiate, directed by Norton Funeral Home, Bishopville Chapel.  Burial will be in the St. John Cemetery.  Visitation will be held 5:00-7:00pm Friday at Norton Funeral Home.

Mrs. Ada B. Scarborough Frierson was born on June 21, 1929 to the late Endy Thomas Scarborough and Walter Scarborough, Sr.

At an early age, Ada joined Mt. Hermon Missionary Baptist Church. She graduated from Dennis High School, Bishopville, SC in 1950. She was a faithful member of the Mt. Hermon Gospel Missionary Baptist Church Gospel Choir, YWA, and Pastor’s Aide when she was in good health. She was initially employed by Dr. Leroy Dennis as CNA and later with Hartsville Manufacturing Co., and transitioned to Bishopville Manufacturing Co. She worked several years at Saleeby Retardation Center in Hartsville, SC where she retired.

Humble, obedient, giving and friendly are all words that can be used to describe Ada. However, the words which best describes Ada are gracious, servant leader. Sister Ada B. Frierson was a charter member of Benjamin Chapter #346 origination was in 1959 and she remained a faithful member for 60 yrs. Ada was also a life-long member of Sons and Daughter Job #206 Lodge of Lee County and an Alumnus of Dennis High School. She was also honored with the privilege of holding and maintaining the title of “Mother of the Church” of Mt. Hermon Missionary Baptist Church.

On September 23, 1950, Ada united in holy matrimony to the late Willie James Frierson (Bill). To their union five children were born, one preceded her to death  James Ray Frierson. She leaves to cherish three sons, William (Patricia) Dalzell, SC and Larry (Betty), and Willis both from Bishopville, SC., one daughter, Dr. Ada Vanessa Bradley (Leslie) McDonough, GA. She also leaves behind 17 grandchildren, 21 great-grandchildren, and 2 great-great grandchildren. Three sister-in-law, two brother-in-law a host of nieces, nephews, cousins and a God-daughter Angela Lighty-Jones, special cousin Wilson Robinson and other relatives and friends.

Blessed is the father who shares his heart, gives his time and loves his family, Proverbs 20:7

Norton Funeral Home is honored to be serving the Frierson family.

To order memorial trees or send flowers to the family in memory of Ada Belle Frierson, please visit our flower store.